Lindsay Kunkle Selected as
2020 Recipient of the
Albert B. Prescott Pharmacy Leadership Award

December 16, 2019, East Hanover, NJ – In the 34th annual presentation, the Pharmacy Leadership and Education Institute has named Lindsay L. Kunkle, PharmD, MBA of Alexandria, VA the 2020 recipient of the Albert B. Prescott Pharmacy Leadership Award. Dr. Kunkle is the Senior Director of Practice Advancement for the American Pharmacists Association (APhA). She is being recognized for her leadership through practice-based research, consensus development, professional organization leadership, and developing and growing APhA programs that advance pharmacy practice and pharmacist engagement in the profession. Dr. Kunkle will receive her award and deliver a scholarly address during the APhA Annual Meeting in National Harbor, Maryland on the evening of Saturday, March 21, 2020.

The Albert B. Prescott Pharmacy Leadership Award recognizes a pharmacist less than 10 years past graduation for demonstrating exemplary leadership qualities indicative of someone likely to emerge as a major leader in pharmacy over the course of his or her career. It has evolved from an award first presented in 1987 by Phi Delta Chi to recognize leadership by a young pharmacist. It is currently coordinated by the Pharmacy Leadership & Education Institute (PLEI), with major support from the Phi Lambda Sigma Pharmacy Leadership Society. In conjunction with accepting the award, each recipient delivers a scholarly lecture on issues such as pharmacy as a profession, leadership, or future trends in pharmacy practice or education. 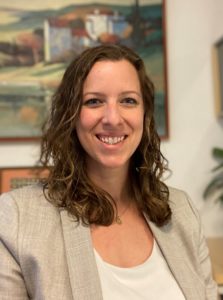 Dr. Kunkle began her career at the APhA Foundation as the Executive Resident in Association Management and Leadership. When her residency was over, APhA retained her talent as a Project Management Specialist within the APhA Foundation where she directed research and innovation projects. Dr. Kunkle played a key role in the management of Project IMPACT: Diabetes and several other practice-based research and consensus development projects. During a portion of her tenure, Dr. Kunkle served as a shared staff member with the Center for Disease Controls in the Division for Heart Disease and Stroke Prevention, allowing her to help develop translational guides to facilitate public health – pharmacy partnerships.

About Albert B. Prescott
Albert Prescott was Dean of Pharmacy at the University of Michigan from 1870 to 1905. A maverick, he was rebuffed by APhA for his heretical view that pharmacy should be an education-based profession – not an experienced-based trade. The credentials committee at the 1871 APhA convention rejected Prescott as unworthy of being seated as a voting delegate. But Prescott persevered. By the 1890s, Prescott’s vision and convictions were proven correct. The rest of the country began to follow Prescott’s lead. Ironically, he was eventually elected president of APhA in 1899, and became the 0first president of the organization we now know as the American Association of Colleges of Pharmacy (AACP), when it was founded in 1900.