Please enjoy this presentation of the 2021 Albert B. Prescott Leadership Award recognizing Dr. Jennifer Bacci. The event was held on Sunday, March 14, 2021.

Jennifer Bacci Selected as
2021 Recipient of the
Albert B. Prescott Pharmacy Leadership Award

December 17, 2020, East Hanover, NJ – In the 35th annual presentation, the Pharmacy Leadership and Education Institute has named Jennifer L. Bacci, PharmD, MPH, BCACP, of Seattle, Washington, the 2021 recipient of the Albert B. Prescott Pharmacy Leadership Award. Dr. Bacci is recognized for her outstanding leadership example in the Academia-CPESN Transformation (ACT) Pharmacy Collaborative Task Force by the American Association of Colleges of Pharmacy (AACP), as a Flip the Pharmacy coach and as a network facilitator for Community Pharmacy Enhanced Services Network (CPESN) Washington.

Dr. Bacci is also a nationally recognized researcher in implementation science and community pharmacy practice advancement. She trains the next generation of pharmacists through a high level of involvement in community residency training, mentoring students in research and teaching, and leadership contributions to UW School of Pharmacy’s curricular innovation. Dr. Bacci will receive her award and deliver a scholarly address during a webcast around the time of the APhA Annual Meeting in March 2021. Details of date, time, and access will be announced later.

The Albert B. Prescott Pharmacy Leadership Award recognizes a pharmacist fewer than 10 years past graduation for demonstrating exemplary leadership qualities indicative of someone likely to emerge as a major leader in pharmacy over the course of his or her career. It evolved from an award first presented in 1987 by Phi Delta Chi to recognize leadership by a young pharmacist. It is currently coordinated by the Pharmacy Leadership & Education Institute (PLEI), with major support from the Phi Lambda Sigma Pharmacy Leadership Society. In conjunction with accepting the award, each recipient delivers a scholarly lecture on issues such as pharmacy as a profession, leadership, or future trends in pharmacy practice or education.

Dr. Bacci received her Doctor of Pharmacy at the University of Pittsburgh 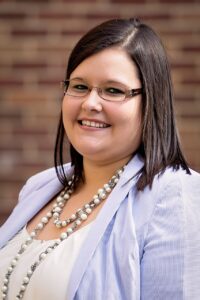 School of Pharmacy in 2011, where she also completed a PGY-1 community pharmacy residency and post-doctoral fellowship in community practice research. She received her Master of Public Health at the University of Pittsburgh Graduate School of Public Health. In 2015, she joined the faculty of the University of Washington School of Pharmacy (UWSOP) in Seattle where she trains student pharmacists and collaborates with community pharmacy partners through practice development, research, and advocacy.

Dr. Bacci established herself as a leader during her training serving as the PharmD representative to the Graduate and Professional Student Association and as a liaison to her university’s H1N1 response team. When pharmacists gained the authority to administer vaccines in Pennsylvania, Dr. Bacci volunteered and led the workflow redesign and staff training at her internship site within a high-volume regional supermarket chain.

As a faculty member at the UWSOP, she has been heavily involved in the PharmD curriculum redesign effort, co-chairing the Fundamentals Work Group, a group of faculty and staff across three departments. She also serves as the faculty advisor to three registered student organizations, guiding the professional development of student and future leaders of the profession outside of the classroom. She was recently appointed to the University of Washington’s Population Health Initiative by University President, Dr. Ana Mari Cauce. In this role she joins an interdisciplinary group of faculty and public health advocates representing the diverse University community to guide this effort to advance the health of people globally and in her region.

Dr. Bacci is respected as a leader of practice advancement within Washington state through her research program, which addresses the application of implementation science to advance innovative patient care models in community pharmacy practice. Her work has resulted in over 25 peer-reviewed publications at this early point in her career. But more importantly, her work has drawn the attention of community pharmacy leaders in Washington state and beyond. Dr. Bacci is regularly asked by community partners to advise and collaborate on their pharmacy practice models.

About Albert B. Prescott

Albert Prescott was Dean of Pharmacy at the University of Michigan from 1870 to 1905. A maverick, he was rebuffed by APhA for his heretical view that pharmacy should be an education-based profession – not an experienced-based trade. The credentials committee at the 1871 APhA convention rejected Prescott as unworthy of being seated as a voting delegate. But Prescott persevered. By the 1890s, Prescott’s vision and convictions were proven correct. The rest of the country began to follow Prescott’s lead. Ironically, he was eventually elected president of APhA in 1899, and became the first president of the organization we now know as the American Association of Colleges of Pharmacy (AACP), when it was founded in 1900.

The Pharmacy Leadership & Education Institute (PLEI) develops leaders among student pharmacists and pharmacists by conducting programs to improve leadership skills, to strengthen the profession as a whole, and thereby advance the public health. PLEI strives to reach as many student pharmacists and pharmacists as possible, in a variety of venues, to help them grow in their personal leadership skills, giving them examples of how to apply these skills in pharmacy settings (e.g., ambulatory, inpatient, long-term care, corporate, academia, government) and in their personal lives. PLEI coordinates the Prescott Pharmacy Leadership Award, Leader Development Seminars, Leader Development Institute, the Lead←Grow→Shape leadership workbook, and other educational events for pharmacists and student pharmacists. The Internal Revenue Service (IRS) recognizes PLEI as a 501(c)(3) charitable organization; EIN 58-2296988. You can learn more about PLEI at www.plei.org.

Download a PDF copy of this press release here.