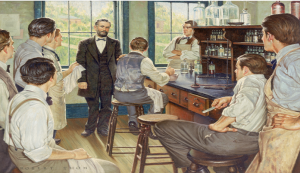 Lithograph painting of Dr. Prescott by Robert Thom, from the Parke-Davis History of Pharmacy Collection

The Albert B. Prescott Pharmacy Leadership Award, first presented in 1987, is given annually to a young pharmacist no more than 10 years into his or her career. The award is coordinated by PLEI and sponsored by Phi Lambda Sigma. From its beginning, this has been a profession-wide recognition, not restricted to any fraternal group or practice setting. The recipient shall have demonstrated exemplary leadership qualities as a young pharmacist indicative of someone likely to emerge as a major leader in pharmacy over the course of his or her career.

Albert B. Prescott was a maverick in the late 1800s because of his advocacy for an academic basis for pharmaceutical education. Founder and Dean of the College of Pharmacy at the University of Michigan, Prescott nurtured his idea for nearly 25 years before the rest of the profession caught up with him. This chemist, educator, and leader of pharmacists helped found Phi Delta Chi at the University of Michigan in 1883.

The Pharmacy Leadership & Education Institute (PLEI), Phi Lambda Sigma, and several prior recipients select the recipient of the Prescott Leadership Award. The Award is presented annually during the APhA Annual Meeting, at which time the recipient delivers a scholarly lecture on issues such as pharmacy as a profession, leadership, or future trends in pharmacy practice or education. The winner receives a tangible award and an honorarium.

For information about nominating a young pharmacy leader for the next Albert B. Prescott Pharmacy Leadership Award, email Ron Corey at rcorey@plei.org.

Where are they now? Enjoy our retrospective on past Prescott Award Winners.